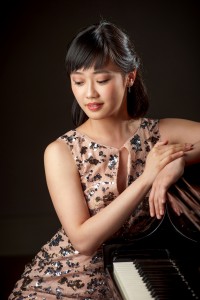 Praised for her “bountiful gifts and passionate immersion into the music she touches” (The Plain Dealer), Chinese pianist Fei-Fei is a winner of the Concert Artists Guild Competition and a top finalist at the 14th Van Cliburn International Piano Competition. She continues to build a reputation for her poetic interpretations, charming audiences with her “passion, piquancy and tenderness” and “winning stage presence” (Dallas Morning News).

Her burgeoning career includes a number of prominent concerto engagements in the 2017-18 season, including performances with the American Symphony Orchestra at the Bard Music Festival, the Buffalo Philharmonic, Long Beach Symphony, Calgary Philharmonic, Denver Philharmonic, Knoxville Symphony, and a return engagement with California’s Pacific Symphony for a special performance celebrating the Chinese New Year.  This season, Fei-Fei also performs in recital in ten states across the United States as well as nineteen cities in China.

Fei-Fei was showcased prominently as a Cliburn finalist in the documentary film, Virtuosity, about the 2013 Cliburn Competition, which premiered on PBS in August 2015, and she has also been featured numerous times on New York’s WQXR radio.

Fei-Fei has performed in recital at Alice Tully Hall as the winner of Juilliard’s 33rd Annual William Petschek Recital Award.  Other notable recent recitals in the US include her Weill Recital Hall debut at Carnegie Hall, Gilmore Rising Stars (Kalamazoo, MI), the Smithsonian American Museum in DC, SUNY Purchase Performing Arts Center and The Cliburn’s spring 2015 Chopin Festival, and in Europe at the Auditorio Nacional de Madrid, Warsaw Philharmonic Concert Hall and the Louvre.

She is a member of the Aletheia Piano Trio, which debuted at the Kennedy Center in February 2014 as part of its Conservatory Project, and performs across the US and in Asia. Deeply committed to sharing her joy for music and connecting with communities, Fei-Fei also engages students and community audiences through frequent school and outreach concerts and master classes.

Born in Shenzhen, China, Fei-Fei began piano lessons at the age of 5. She moved to New York to study at The Juilliard School, where she earned her Bachelor and Master of Music degrees under the guidance of Yoheved Kaplinsky.