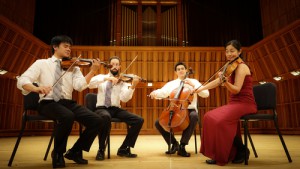 The Telegraph Quartet was formed in 2013 with an equal passion for the standard chamber music repertoire as well as contemporary and non-standard repertoire, alike. Described by the San Francisco Chronicle in 2017 as “…an incredibly valuable addition to the cultural landscape” and “powerfully adept… with a combination of brilliance and subtlety,” the Telegraph Quartet was most recently awarded the prestigious 2016 Walter W. Naumburg Chamber Music Award. Past prizes include the Grand Prize at the 2014 Fischoff Chamber Music Competition. The Quartet has since gone on to perform in concert halls, music festivals, and academic institutions from Los Angeles and New York to Italy and Taiwan, including Carnegie Hall, San Francisco’s Herbst Recital Hall and the San Francisco Conservatory of Music Chamber Masters Series and at festivals including the Chautauqua Institute, Kneisel Hall Chamber Music Festival, and the Emilia Romagna Festival. In 2016, the Quartet was invited as one of a handful of emerging professional string quartets from around the world to perform in Paris, France at the Biennale de quatuors à cordes, a showcase for major concert presenters of Europe and Asia taking place at the Philharmonie de Paris.

The Telegraph Quartet gave its first Carnegie Hall appearance in Weill Recital Hall in 2015 along with violinist Ian Swensen and pianist Jeff LaDeur and the Quartet will return to Carnegie Hall in 2018 for its Naumburg Award Recital featuring the world premiere of Robert Sirota’s third string quartet. Notable collaborations have included projects with cellist Norman Fischer, pianist Simone Dinnerstein and the Henschel Quartett. A fervent champion of contemporary and 20th century repertoire, the Telegraph Quartet has co-commissioned John Harbison’s String Quartet No. 6, which is scheduled for its West-Coast premiere in the fall of 2017 at San Francisco State University’s Morrison Artist Series. In 2017 the Quartet plans to release its debut album featuring works by Anton Webern, Benjamin Britten, and Leon Kirchner.

Beyond the concert stage, the Telegraph Quartet seeks to spread its music through education and audience engagement. During the 2017/18 Season, theQuartet will be travelling to communities and schools in Maine with Yellow Barn’s Music Haul, a mobile performance stage that brings music literally outside of the concert hall to communities across the U.S. The Quartet has given master classes at the San Francisco Conservatory of Music Collegiate and Pre-College Divisions, through the Morrison Artist Series at San Francisco State University and abroad at the Taipei National University of the Arts and National Taiwan Normal University. Members of the Quartet hold teaching positions in chamber music and private instruction at the San Francisco Conservatory of Music’s College and Pre-College programs. The Quartet has also worked in collaboration with the American luthier Douglas Cox, who created a set of instruments specifically to be performed together as a balanced quartet, featuring a performance and open-forum presentation of these instruments at the San Francisco Conservatory of Music.<p>